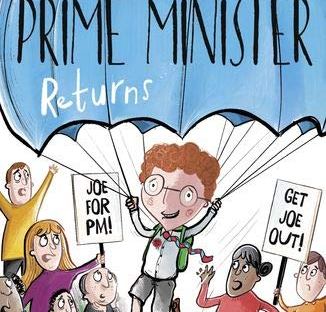 The Accidental Prime Minister Returns in the hilarious sequel to The Accidental Prime Minister by Tom McLaughlin. 13 year-old Joe Perkins is the Prime Minister of England. For him, an ordinary day involves cameras, questions and crowds. He’s grown quite used to all of the attention and making decisions that affect the country (and has done a surprisingly good job). He’s very excited about his new project – Green Space. Joe believes every child should have access to a green space in which to play.

Then, suddenly, breaking news announces that there’s been a mistake and Joe shouldn’t actually be Prime Minister. With honesty and integrity, Joe decides to call a General Election and give the people a chance to vote him in properly. His rival, Theodore Flunk, will do whatever it takes to win. With his sinister smile, menacing laugh and obsession with power, he’s not going to make things easy for Joe.

As they hit the campaign trail, laugh-out-loud moments fill the pages. From big campaign buses to sneaky campaign managers to speeches going wrong, will Joe be able to do enough to win?

Both children and adults will find this story very, very funny! Some of the political observations hit a bit close to home, especially the statement that politicians should be caring for people, not trying to make money from them. Children who are aware of the news and political climate will find it very interesting to make comparisons between the characters in this book and real life.

The Accidental Prime Minister Returns proves that children can do just as good a job as adults when it comes to running the country – probably even better! Especially if it involves trips to Nando’s, a fireman’s pole and Hats for Cats Thursdays!

Thank you to Oxford University Press for this fun book!

Click on the cover below to find out more or purchase on-line from Amazon.

We are a participant in the Amazon Services LLC Associates Programme, an affiliate advertising programme designed to provide a means for us to earn fees by linking to Amazon and other affiliated sites. As an Amazon Associate, we earn from qualifying purchases.